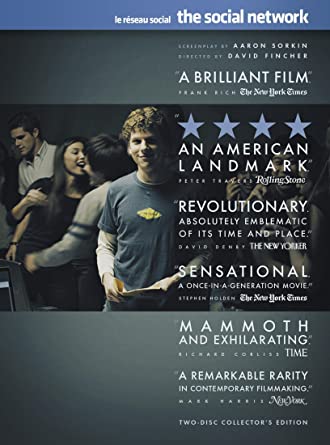 I’m finally got around to commenting on The Social Network. As a geek who works in the tech industry, I have all kinds of opinions about Facebook and most of them are negative. I don’t like how they handle security and my general impression is that the company could care less about getting security right. My opinions on that have not changed since Facebook first opened to the world.

If you take into consideration that movies are art and even ones based on real life events are always going to be closer to art than the truth, the movie was fantastic art. If you for one moment believe that any of the events depicted in the film are true, you are sadly mistaken. It can’t be looked at like that. Movie scripts are constructed according to very precise formulas and real life does not follow the conventions of a script. You simply cannot take this film as anything other than a brilliant piece of art. As such, the film works very well as an engaging, modern drama about a brilliant man and his insecurities.

I loved the look and feel of the cinematography and the simplistic, yet powerful conventional film making style of the director. The screenplay was staccato and interesting and at times had me struggling to catch up. But I love films like that. It’s as if someone made a very intelligent film about a very intelligent protagonist. There are no gunfights and chase scenes, it’s all talking and character building.

Do I think this film is an important commentary on Mark Zuckerberg and Facebook? No. I think it’s a great film that should be watched purely for entertainment. It’s rare that so intelligent a film is even made in this country anymore. But you can’t take what happens in this movie as anything other than fiction. Seriously. It’s a movie.