If you have been thinking about becoming an Amateur Radio operator, I invite you to watch or listen to the latest show on the TWIT Network – HamNation. The show is co-hosted by Bob Heil and Gordon West, two pillars of the Ham community. It’s a great show and a fun way to get introduced to the hobby. 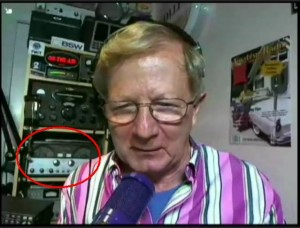 This is a screen shot I took of Bob from the latest show. I circled a rig behind him, because that’s the radio I described in detail in my novel, Null Pointer. A Hallicrafter’s receiver.