I love to plan and plot and outline. It’s one of my favorite parts of writing. When I first wrote Null_Pointer I was not thinking of a series, but as I learned more about the genre, it was clear that a series is somewhat of a staple and that readers love them. I love having a back list because that’s how we writers make our living.

In the later drafts of N_P, I started to map out a series of JJ books and strung together the threads of a series wide character arc for the hero. I’m not at liberty to discuss said arc, except to say that it exists.

Null_Pointer will be relaunched this Spring and aside from another detailed edit, it will get a new cover. Knowing that the book is just the first of a six book series, I can now plan out what all the books might look like. Basically, we want the reader to understand there is a series, as soon as the second book comes out. Both N_P and KD9 will have a similar style. Knowing the titles of all the books in the series, lets me play around with thumbnails of what all the books would look like together.

Below is the first attempt at defining front cover look and feel for the Joshua Jones Mystery Series. 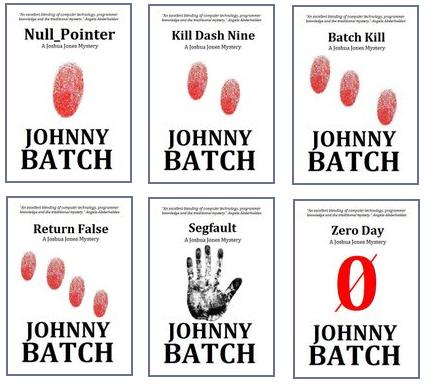 These are just crude thumbnails, so the actual fonts and images etc., will get refined. They will also not have solid white backgrounds. The theme for this concept is finger prints, at least up until we run out of flanges. Then we go to the number zero for the final book. All the finger prints will be made from binary code to suggest high tech, computer crime. They are red to suggest murder and to attract the eye.