Writing a Novel in Git 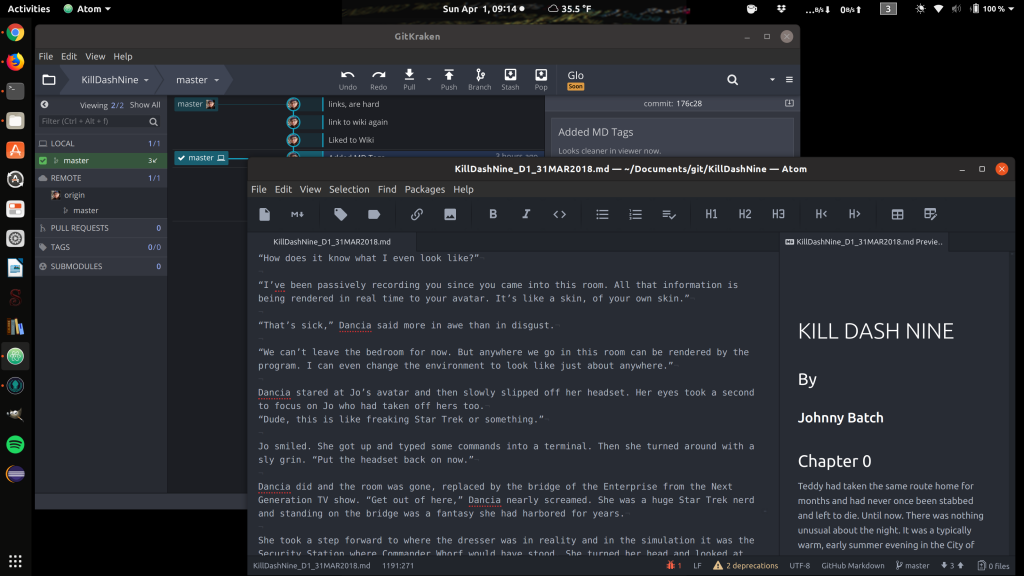 Not many writers are well versed in programming or have similar IT knowledge. I happen to have some technical ability in this area and occasionally, I use it. I’ve decided to move KD9 into a source control program that is freely available on line, called Git.

Git was created by Linux Torvalds, the creator of the Linux kernel. He was looking for a better way to keep track of changes to the core of the Linux operating system. Somewhere along the way Git took off and now just about every programmer uses it to store their code. I use it at my day job and my son uses it for the tools he makes in Python and Java.

Besides, I write tech mysteries, it’s somehow appropriate that I write them in a programmer’s editor, Atom, and store them in Git. In order to make this happen, I had to save my manuscript in text format and then convert it to .md. Now when I commit my changes which are actually new chapters and scenes, I can diff them just like I do with new lines of code. Manipulating text files is at the heart of what programmers do and in many ways it describes the nuts and bolts of writing too.

The larger issue at hand is that my novel is now publicly available for anyone to  read and even more interesting, for anyone to download. Will this prevent me from making money selling it as a novel? Maybe. But it’s been my experience that it won’t matter at all to sales. Readers don’t peruse GitHub looking for hot new novels. However, programmers do peruse the repository looking for code projects. If one or two programmers stumble upon my mystery novel about a programmer – I just might get another fan.

I’m willing to get those kinds of fans every time. Because they’re the ones that really love what I’m doing. They get me and my work.